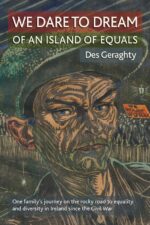 We Dare to Dream of an Island of Equals

We Dare to Dream is directed at everyone who has chosen to live on this island and who wishes to join us on our long, rocky road toward equality and diversity, and a better life for all.

Des Geraghty is a born-and-bred Liberties man who grew up in a family with a strong tradition of trade unionism. In We Dare to Dream he explores some of the history of the first century of Irish independence, from the idealism of Larkin and Connolly to the cruel reality of our current homelessness crisis, through the story of his own family’s involvement in a multitude of social, political, and cultural movements.

From the republican and trade unionist activities of his parents, Lily O’Neill and Tom Geraghty, in the fraught years of the 1913 Lock-Out and the Civil War, through the crushing conservatism of both Church and State in the newly independent Ireland, to the intimate involvement Des and his four brothers had in trade unionism and Irish traditional music and poetry in the latter half of the twentieth century, We Dare to Dream takes us on an intimate journey along the rocky road of change during the first century of Ireland’s ‘two-state solution’, imposed after the War of Independence.

Many of the characters in this story of Ireland never achieved any great fame or fortune. Nor did they seek it, but by their efforts they helped to determine the essential nature of the country we now inhabit. We Dare to Dream challenges us to learn from our successes and failures, to retain the best of the past and embrace the possibilities of the future, while always refusing to be prisoners of our own chequered history.

We Dare to Dream is directed at everyone who has chosen to live on this island and who wishes to join us on our long, rocky road toward equality and diversity, and a better life for all.

Des Geraghty is a trade unionist and social activist. He worked as a full-time trade union official since 1969, was elected vice-president of SIPTU in 1997 and was then president of the union until 2003. He served as an MEP from 1992 to 1994.  He is also a musician and folklorist, and the author of several books, as well as a number of music, song and poetry productions in both English and Irish.

Captions: Cover image is a painting by Harry Kernoff (1930), of Jack O’Neill, Lily’s brother and campaigner for the Dublin Unemployed.

‘Moving effortlessly from the intimate to the rollicking, from the historical to the anecdotal, this is a panorama of Dublin life like none other, seen with a “pityin’ scornin’ eye”, as Yeats has it in a ballad, a portrait gallery of known and unknown characters, their antics, friendships, conflicts and dreams.’

‘We Dare to Dream could be a companion to Sean O’Casey’s autobiographies. It’s an important book, which flows from Des Geraghty’s strong mother, Lily O’Neill; and woven through his family history is the struggle for workers’ rights in the face of powerful employers and a conservative Church and State. It is also the history of the Irish trade union movement and its connections in Britain and the USA. Des and his four brothers came to hold important positions in trade unions. As Des says, many battles have been won, “But we have many more hills to climb … to create that Island of Equals that our family of seven – and so many others – dare to dream of.”’

‘Des Geraghty tells the story of Dublin working-class radicalism over the past century through the unique lens of his own family, none of whom was willing to be “a mere observer of change”. They were in the thick of every battle for justice from the 1913 Lockout to Marriage Equality, and Des is a born storyteller, punctuating his tale with poetry and song.’

‘Lifelong trade unionist Des Geraghty has written a fascinating account of growing up in Dublin’s impoverished and fast-disappearing Liberties, the intense conservatism of successive Irish governments and the smothering domination of the Catholic Church at the time. He recalls the beginnings of a new radicalism in the 1960s, inspired by the Anti-Apartheid movement and the Civil Rights and Anti-Vietnam War campaigns in the US. He describes the growth of the Women’s Movement, challenging a level of oppression scarcely believable today. And all along, he intersperses the story with tales of his much- loved traditional music and ballads.’