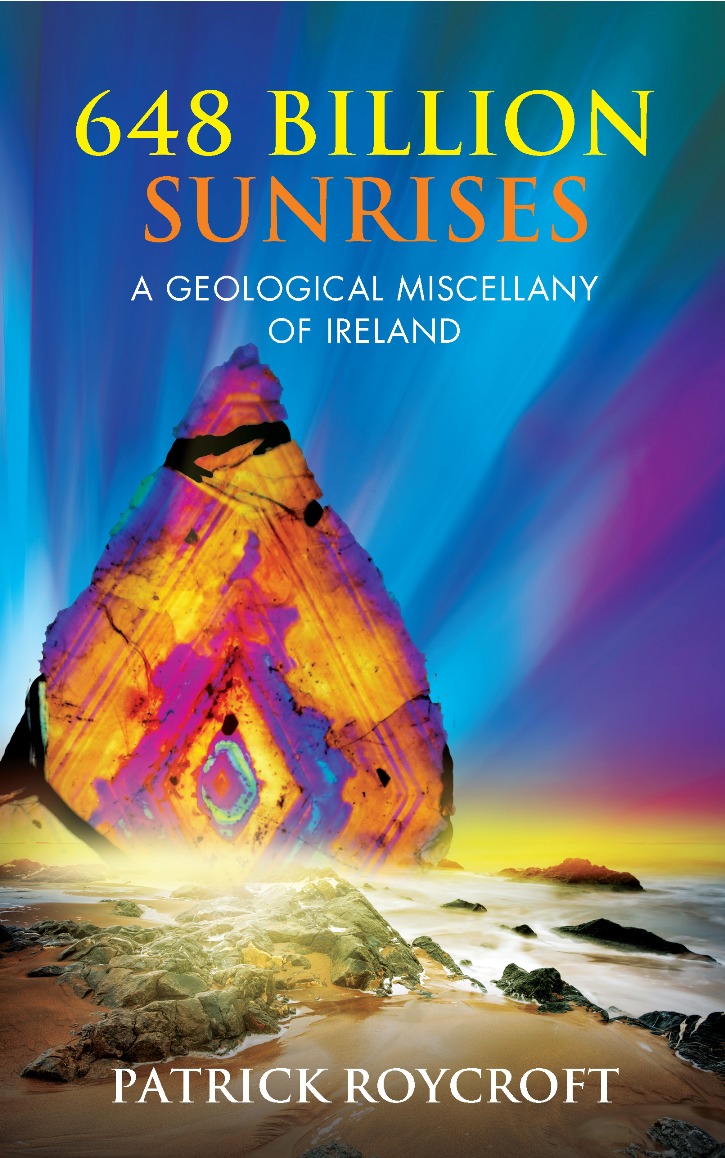 Some readers of this review will have met Dr Patrick Roycroft at the OUGS Ireland Branch visit to the UCD Mineral Collection in November 2016. For those who are less familiar with Patrick, he is a geologist with a PhD from University College Dublin and is currently working on a project to curate and research the aforementioned UCD Mineral Collection with the help of the National Museum of Ireland. He is ex-president of the Irish Geological Association and an editor with the geological journal Elements. He has also been involved with Ingenious Ireland, creators of the excellent Dublin Rocks! audio-guide tour of Dublin, which I recommend. His book 648 Billion Sunrises: A Geological Miscellany of Ireland was published in November 2015, and is aimed at the layperson with an interest in geology, but not necessarily in any particular academic studies in the area. At 194 pages, it is a general introduction to the geology of Ireland, which covers the broad geological history of the island as well as dispelling some myths — for example that misguided belief held by some that the Sugar Loaf Mountain in Wicklow is an extinct volcano rather than what it really is, primarily composed of quartzite.

The book is written in a light-hearted and easy-to-understand way, and is full of anecdotes, which help to make each subject more interesting. Regarding the Sugar Loaf Mountain example, he also explains what exactly a ‘sugar loaf’ is and why a mountain should be given such a name. The book is divided into short sections, each self-contained and covering a separate topic, which makes it easy to dip in and out of the book at leisure. As well as focusing on a few of the more famous features of Irish geology, he also conducts a county-by-county geological review of the island, identifying for each a separate county rock, mineral and fossil — a great way to review the geological variety contained in such a small part of the world.

Finally, the historical context behind geological findings, the socio-economic impact of local geological resources and the genealogy of the people behind the development of geoscience in Ireland are touched on in the book, making it much more than a general review of Ireland’s geology, but also an insight into its history and the role geology has played in Irish society. The many anecdotes and simple way of explaining concepts and features by such an authoritative scholar make it likely that even someone already familiar with our island’s geology will discover something new or learn more about a topic they thought they already understood fully. The book contains the latest geological findings, including unpublished and original research, meaning that it is also an excellent way of keeping up with the latest developments in Irish geology. Finally, references are provided for anyone interested in looking deeper into any topic touched on in the book. Overall I feel it is an excellent read and an important addition to the library of anyone interested in the geology of Ireland.