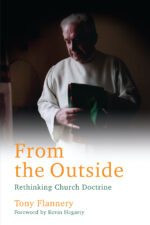 From the Outside: Rethinking Church Doctrine
€15.00 Add to Cart

From the Outside: Rethinking Church Doctrine

Challenging and controversial, From the Outside asks the Church leadership to look again at some of its basic doctrines. Change is needed.

In stock (can be backordered)

Eight years ago the popular and outspoken priest Tony Flannery was withdrawn from his ministry by his religious congregation, the Redemptorists, under orders from the Congregation for the Doctrine of the Faith in the Vatican. The CDF took issue with some of his writings, saying they were heretical. He was forbidden to perform priestly duties, or to write any articles or give interviews.

Refusing to submit to this sentence, the intervening eight years have given him a greater degree of freedom of thought and action than he had ever experienced during his life as a priest in ministry. From the Outside is a product of what he has ascertained and come to believe during those years. The Church is facing many challenges. A great many people are leaving or have left; priest numbers are declining; clerical sex abuse still festers; women are excluded from ministry and decision-making, and that is becoming more and more of an anomaly as time goes by. Leadership in the Church seems incapable of dealing with these challenges, leaving the Church with a serious credibility issue.

Along with these issues, From the Outside also deals with a much more fundamental and intractable problem, namely the problem of Church doctrine. Many of what are regarded as fundamental doctrines in the Church date from the early centuries of Christianity. To hold that what was defined about God over fifteen hundred years ago must be accepted without question in the twenty-first century is no longer credible. Flannery outlines what needs to be changed, both in the content and language of doctrine, and in the images and metaphors used.

Challenging and controversial, From the Outside asks the Church leadership to look again at some of its basic doctrines. Change is needed.

Tony Flannery is a Redemptorist priest, well known for his writings on a variety of Church issues. His previous books include A Question of Conscience (2013), From the Inside: A Priest’s View of the Catholic Church (1999), Keeping the Faith (2005), and Death of Religious Life? (1997).