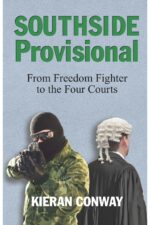 Southside Provisional: From Freedom Fighter to the Four Courts
€15.99 Add to Cart

Southside Provisional: From Freedom Fighter to the Four Courts

Set against the political and military developments of the 1970s, Southside Provisional: From Freedom Fighter to the Four Courts chronicles the author’s journey from directionless middle-class law student to committed IRA activist. It offers detailed accounts of the politics, organisation, training and operational methods of the IRA in the early 1970s, and honestly addresses issues such as the IRA bombing campaign and its response to the loyalist killing of nationalists.

“One of the more important, courageous and insightful books on the Troubles, all the more so because of the southern angle. I predict that it will be remembered for a long time.”
– Ed Moloney, journalist and author

It’s August 1969 and Northern Ireland is burning. Catholics are marching for civil rights and loyalist attacks have brought the British army onto the streets to quell the riots. In the middle-class suburbs of south Dublin, the political atmosphere that is transforming the North finds an unlikely convert in law student Kieran Conway. Determined to play his part, he goes to London to join the IRA.
Following his training, he participates in gun fights, bank raids and intelligence-gathering sorties in England, on the Irish border and in Derry, where he encounters the young Martin McGuinness. Arrested during a British Army raid on a safe house, he is imprisoned in Crumlin Road prison, where he participates in the successful hunger strike for political status. He is transferred to Long Kesh, where he becomes adjutant to the legendary Billy McKee. On his release, he reports back to the IRA and is appointed to its general headquarters staff, where he serves during the controversial ceasefire of 1975. Profoundly disillusioned by the dysfunction within the movement, he resigns in late 1975 and returns to university, although he rejoins the IRA in 1981 before eventually leaving for good in 1993.

Southside Provisional provides candid portraits of the leading IRA figures of the 1970s, alongside detailed accounts of the politics, organisation, training and operational methods of the IRA. Throughout the story, Conway’s personal journey from teenage middle-class Anglophile to committed IRA activist is set against the political and military developments of the 1970s. He is not afraid to address difficult issues such as the IRA bombing campaign and its response to the loyalist killing of nationalists.

Honest, fearless and frank, Southside Provisional is a fascinating first-hand account of Conway’s time within Ireland’s most secretive and notorious organisation.

Kieran Conway grew up in south county Dublin and was educated at Blackrock College and University College Dublin. He has a solicitor’s practice in Dublin specialising in criminal law.