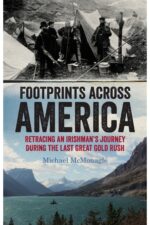 Footprints Across America: Retracing an Irishman’s Journey During the Last Great Gold Rush
€16.95 Add to Cart

Footprints Across America: Retracing an Irishman’s Journey During the Last Great Gold Rush

A travel book that takes the reader on an epic journey across the great plains of the US, following in the footsteps of Micí Mac Gabhann, a nineteenth-century Irish emigrant who crossed the US to seek his fortune in the Klondike Gold Rush

Inspired by the adventures of a hardy nineteenth-century Irish emigrant to America, Micí Mac Gabhann, who detailed his exploits in the Irish language book Rotha Mór an tSaoil, Michael McMonagle undertakes an epic journey to retrace his steps. Following his journey from New York to the Klondike Gold Rush, he traverses the Great Plains, the Rocky Mountains of Montana, and the vast Alaskan wilderness. As he compares the America that Micí encountered in the late nineteenth century with that of the twenty-first century, the author provides a unique perspective on a very different America.

Footprints Across America weaves the two journeys together and highlights the strong links between both eras. We are brought to historic places like Butte and Dawson City, mining ghost towns, Native American reservations, ranch houses and isolated Alaskan villages. We are dragged up mountains and down rivers. In these out-of-the-way places, the voices of cowboys, shamans, exotic dancers, soldiers, chancers, miners and Native Americans emerge to paint an insightful picture of life in America today, while the author also paints a compelling picture of the life of an immigrant caught up in the excitement of the Gold Rush.

Michael McMonagle is an entertaining, easy-going and humorous travel companion who has an empathetic ear for the people he encounters and an observant eye for the natural world. In Footprints Across America he reveals the diverse and fascinating nature of America, then and now.

Michael McMonagle lives in Donegal. He is the author of Walking the Back Roads: A Journey from Donegal to Clonmacnoise (Appletress Press, 2008).