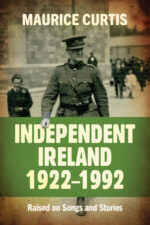 This is also a story of how independent Ireland impacted on the lives of ordinary, everyday people. It is therefore an epic story of struggle and survival in a hidden Ireland.

This latest book from historian and novelist Maurice Curtis is a social, personal and cultural celebration of Ireland in the twentieth century. It is also an exploration of some of the key themes as seen through the lens and prism of music, song, dance and story. In the process, we will discover how nationality was projected and the state consolidated through aspects of its cultural heritage. Music and literature are seen as central to the invention and shaping of the nation’s cultural identity, both past and present.

Some of the most important events include the shift from colonial status to Irish independence; censorship; the Emergency years; the economy, emigration, poverty and TB; the Troubles; feminism and the liberation movement; the Lemass era and the Swinging Sixties; the Haughey/FitzGerald era; the Catholic Church and the confessional state; as well as the campaigns to challenge Ireland’s constitutional provisions on marriage, family and life.

This is also a story of how independent Ireland impacted on the lives of ordinary, everyday people. It is therefore an epic story of struggle and survival in a hidden Ireland.

Above all, this story of Ireland is laced through with many of the soundtracks of music that defined, reflected, shaped and influenced twentieth-century Irish life, heritage, culture, destiny and identity.

Maurice Curtis has written many books on Ireland, and on Dublin in particular. These include: A Challenge to Democracy: Militant Catholicism in Modern Ireland; The Liberties in Dublin: Steps, Stones and Stories; and To Hell or Monto: The Story of Dublin’s Most Notorious Districts.

3 reviews for Independent Ireland 1922-1992: Raised on Songs and Stories